For the last six months, FOUR PAWS has been working with the owners of a dog slaughterhouse in Kampong Thom Province, Cambodia to not only shut it down, but also provide the owners with an alternative livelihood to ensure they never return to the trade again. Most people involved in the dog meat trade do not want to be in the industry, but often feel forced into it out of economic necessity. During our meetings, the owners repeatedly thanked FOUR PAWS for the opportunity for change. During one particularly emotional meeting, the owner expressed that no one had ever provided her and her family with help before to get out of the dog meat trade, and she is forever grateful to never have to kill dogs again. Read more here.

Hours away in the capital city of Phnom Penh, our team has been busy preparing the supplies and kennels needed for the rescue mission. Minivans were put on standby to not only transport all of the dogs to safety, but also remove the rusty holding cages to ensure that they will never hold another dog for slaughter again.

Unfortunately, as rescue mission planning was taking place, Cyclone Sinlaku was barreling through Southeast Asia, bringing torrential rainfall and gusty winds. Nevertheless, on August 2nd our team made the long, muddy trek to the dog slaughterhouse to make final arrangements for the rescue.

During the visit we found many scared and hungry dogs packed into two rusty, heavy metal cages awaiting slaughter. The cages were literally sinking into the mud below with the weight of the dogs on top. Most dogs were scared, trembling, trying their best to hide underneath the rest. Others were panting, too exhausted to move, and just trying to survive. You can see the fear in their eyes whenever a person would walk past their cage. There was a strong putrid stench from the combination of feces, urine, and heat. All of the dogs had originated from Siem Reap Province. They had survived a tortuous drive on the back of a motorbike taking more than four hours to the slaughterhouse. Most dogs had been obviously stolen and many suffered from wounds and cuts. Our team tried to comfort them the best they could and provided them with food and water.

After the storm passed and we were sure we could travel safely – we went back to Kampong Thom to rescue the animals and shut down this slaughterhouse for good.

This cruel facility killed over 12,000 dogs since it first opened. Now the owners get a second chance for a totally different life! With their lifelong commitment to never be involved in the trade again, and though our support with their new local shop, another step is made to end the dog and cat meat trade in Southeast Asia.

The day started well before dawn, as the team feverishly prepared last-minute supplies in the capital city of Phnom Penh. Three minivans were loaded full of the equipment needed for the day – transport crates, leads, dog treats and set off down the muddy roads towards Kampong Thom.

As the team arrived on site, they were greeted by the sweetest faces. Our team leader Rathany rushed to the cages, packed tightly with dogs. Slowly she counted 15 dogs, most looking sad and hopeless. She assessed their condition again. Several of them were severely dehydrated, others were vomiting. As Rathany made her assessments, the rest of the team quickly unloaded and prepared the transport crates. Each crate was thoughtfully prepared with pee pads, waterers, and even a bone for the long 3-hour journey back to Phnom Penh. One by one, the dogs were removed from the holding cages and placed inside their individual transport crate and eventually loaded into the minivans.

After all the crates were safely loaded into the minivans, the team had the monumental task of removing the holding crates and slaughtering equipment that have taken the lives of thousands of dogs before. The team had to pry the heavy cages out of the mud and dirt, and load them into the vans. In Phnom Penh, the cages will be torn apart and sold for scrap metal, the proceeds of which will be used to fund the rescue of more dogs.

Despite today’s success, our job is just beginning. The rescued dogs need extensive medical treatment and behavioral care, to help them forget the horrors they experienced and learn to love again. At our charity partner Animal Rescue Cambodia, the dogs will all be vaccinated, bathed, spay/neutered, and nursed back to health. Once recovered both physically and emotionally from the trauma they’ve endured, each dog will be prepared for adoption into a loving home. But they have a long road ahead of them. 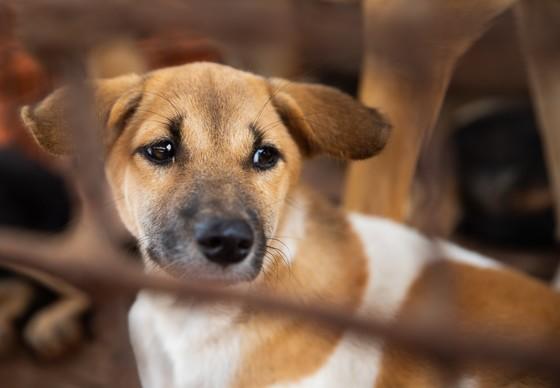 These puppies, Daisy and Rashi were stolen from their home in Siem Reap. They were so hungry, thirsty, and so scared when they arrived at the slaughterhouse. They trembled in fear, as the trader offloaded the cage and jabbed at them with a large bamboo stick to make them go into the holding cage with other dogs waiting for slaughter. Rashi ran right in, scared of being injured. Even though Daisy was utterly exhausted from the trip, she fought with all her remaining energy to not go into the cage. But after the traders jabbed at her harder and harder, she had no choice but to enter. Scared and alone, both pups couldn’t understand where their owner was, and what was happening.

Update "rescue day":
While most dogs are usually quite scared and traumatized, hesitant to enter the transport crates, dog Daisy literally leapt into the arms of Rathany when the door was opened. She showered Rathany in a bath of wet kisses and snuggled around her neck as if to say, please never let me go. 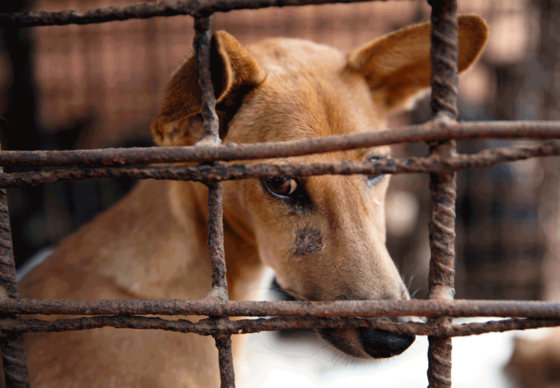 Delphi is a young sweet girl who was brought to the slaughterhouse by a dog meat trader on a motorbike who trades unwanted dogs for pots and pans. She was packed so tightly in the cage mounted on the motorbike that her face was pressed up against the rusty bars, which cut into her cheek leaving an open wound. Delphi is also suffering from a respiratory infection, and she can barely open her right eye due to infection. This girl will need immediate medical attention to treat her illnesses. And she will get lots of food, since she is very skinny. 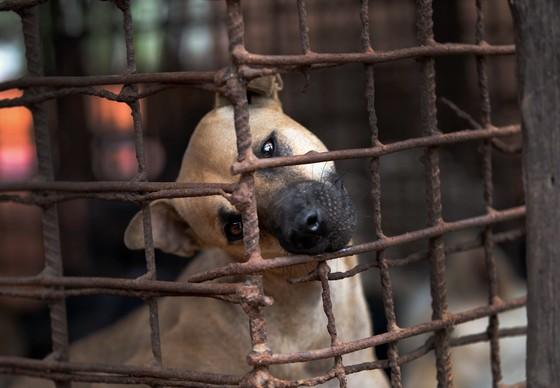 Ethel was desperate to escape the slaughterhouse. Anxious and scared, she was trying to chew her way through the heavy rusty cage bars to freedom. Unfortunately, her teeth were no match for the bars that have imprisoned thousands of dogs before her, holding them for slaughter. She sensed what would happen to her if she didn't get out. She has sustained injuries to her leg from the brutal capture and transport process. 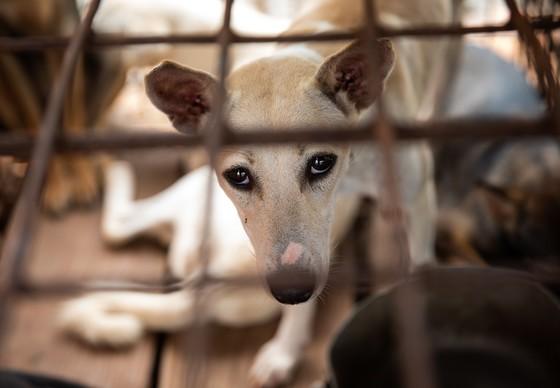 Ginger was obviously someone’s pet before arriving at the slaughterhouse. Ginger had already been through a lot in her short life. When she was younger, someone had taken a knife and cut off the tip of her ear. Unfortunately, this practice is common in Cambodia as many think it cures or protects a dog against diseases such as rabies. Terrified of what was to come next, Ginger stared fearfully out the cage bars with her big brown eyes. 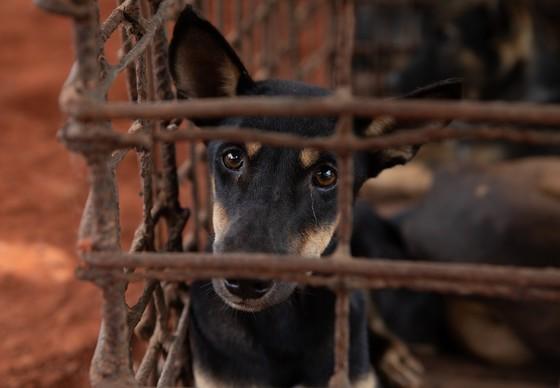 Emma was sadly born the wrong color.  In Cambodia, black dogs are often targeted for their meat due to the misconception that black dogs have medicinal properties when eaten. Emma, a young pup, couldn’t understand why she was snatched from the streets and taken to such a horrible place.

These 15 dogs now have a new chance at life. Please continue to support them and all of the dogs in Cambodia today.

Today all of the rescued dogs received the first medical check-up at our charity partner Animal Rescue Cambodia. While the dogs are starting to recover from the horrors they endured, many of them unfortunately have severe medical conditions that will require intensive treatment. Delphi and Brodie are suffering from severely infected bite wounds, most likely the result of being bitten by the other dogs they were trafficked with. They were started immediately on antibiotic therapy and will have their wounds flushed daily. Many of the other dogs continue to be dehydrated and scared, but are slowly learning to trust people again.

Dog Daisy is a special exception! She started dancing in her kennel upon seeing her rescuer Rathany this morning. Daisy leapt into Rathany's arms again, wanting to cuddle, give kisses, and express her appreciation for being rescued from the slaughterhouse. Once all the medical assessments were completed, Rathany spent the remaining afternoon sitting with Daisy in the kennel showering her with affection, and later gave her a bath! Layers upon layers of dirt came off. Daisy reminds us of why we fight so hard every day to end the cruel dog meat trade, as these dogs are forgiving and loyal companions, not someone’s dinner.

Although these dogs are safe, the sad reality is that there are more dogs waiting to be killed for their meat across Cambodia. Our teams won’t stop until the dog meat trade is banned for good and all dogs are safe from harm.